This year’s Vegas con was special. I know I say that about pretty much every con, because they’re all special in their own way – but no convention had ever been like this. This was the first convention after we found out that Supernatural is ending after next season. When I heard the news, I couldn’t wait to be with a bunch of people who truly “get it”. Fellow fans who are just as devastated by the news as I was, and who love the actors and the Show enough to support the decision anyway. I just wanted to talk to people who understand, and get lots of hugs too. And that’s pretty much what I got.

My friend Laurena from Winchester Family Business and I roomed together at the Rio, where I’ve had all sorts of misadventures before including the traumatic experience of having our bathroom explode in the middle of the night and our room be overtaken with sewage (literally) like something out of a horror movie. The Rio always brings adventures of some kind, even if it’s only the adventure of walking five miles each way from the hotel through the casino to the convention center which is more or less in the next state over. Maybe an exaggeration, but maybe not. There’s also the drama of the Starbucks which insists on closing at 3 pm every day and the serious lack of fast and easy takeout. And the smoke-filled casino.

But actually, I have as many fond memories of the Rio as traumatic ones. This year, like every year, was a time to catch up with friends old and new. I got to see HR’s brand new Richard sculpture along with the rest of the gang. This fandom is so damn talented! 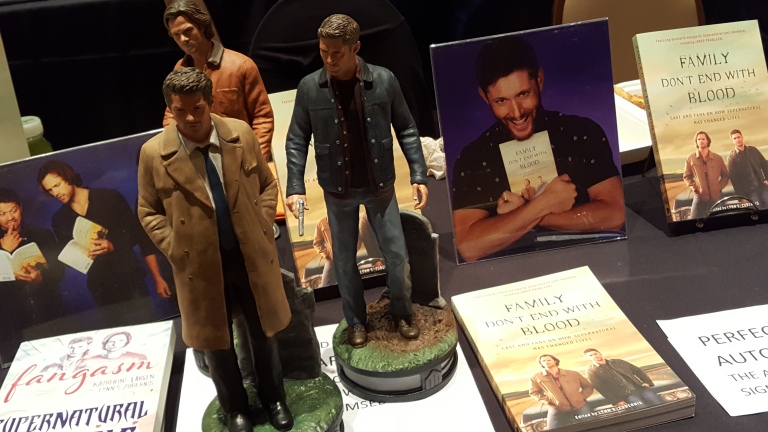 This year, I just wanted to immerse myself in the arms of the SPNFamily, both cast and fans. So that’s what I did.

My friend Alana and I spent a lot of time talking about how many fans were confronted with derision in their non-fannish lives and being judged for grieving the loss of a television show. So we sat down and filmed a video for her channel, which you can watch on her channel (link below). We hope it helps a little bit as we all help each other get through this. And try to look forward to the next year of Supernatural!

Why It’s Okay to Be Sad About Supernatural Ending

I’ve grown to love being part of the “vendor squad” at the Supernatural cons. We’re like a traveling band of wanderers, but we all look out for each other and support each other. There’s always someone to watch your table while you run to the bathroom or pat you on the back when you’re tired or lend you some packing tape or just share a laugh. I was right next to the lovely Jason Manns’ table manned by the equally lovely Misty when he wasn’t there. It was nice to catch up with Jason again and to reminisce a little about the early days of the fandom and some of his first concerts, including in my hometown many years ago! Jason contributed a free digital download of ‘Soul’ to one of our first books, Fangasm Supernatural Fangirls, and a Station Breaks free song to Family Don’t End With Blood too, so he’s part of the FDEWB family. 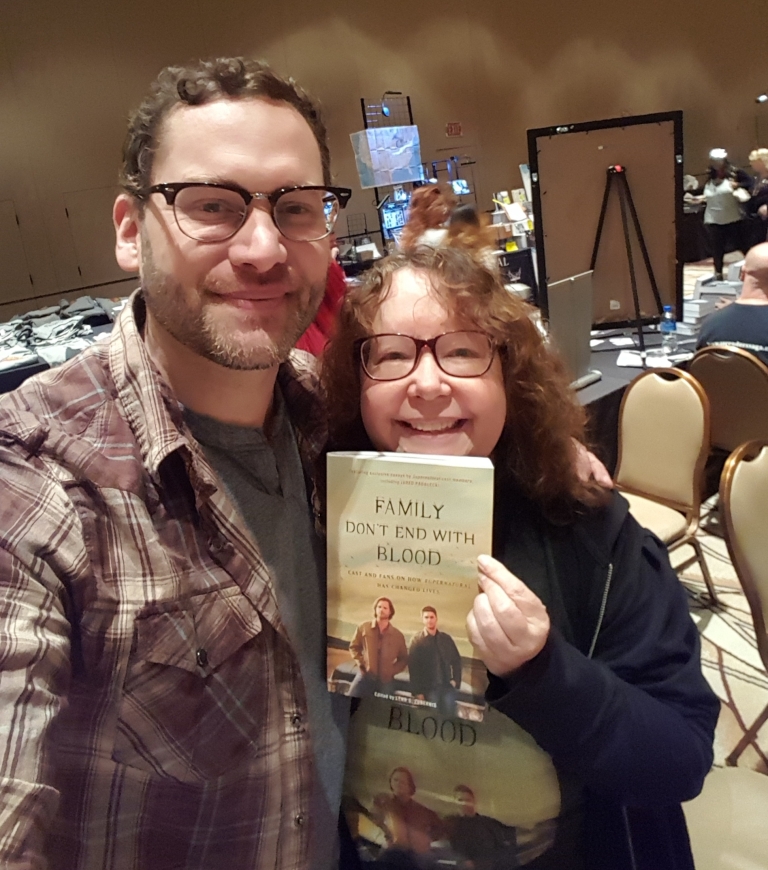 I flew in on Wednesday night and arrived at about 1 am after flying for 9 hours including layovers, so needless to say I was absolutely knackered. I checked in and started dragging my suitcases across the casino floor when I heard someone call out “hey, are you Fangasm?”

A young woman in a Supernatural tee shirt who looked very distraught was asking, so I said yes. Nearly in tears, she asked if I could help her, because her roommate wasn’t getting in until tomorrow and the hotel was not letting her check in because she was under 21. As though stranding her in the middle of a casino was a better idea! I got back in the check in line and gave them a guarantee for her so they’d give her a room – so for the rest of the weekend whenever I saw her, she’d joke that I was her savoir. Hey, we’re all SPNFamily.

Thursday was kicked off by our host Richard Speight Jr., as always, and Louden Swain.

Then it was time for Adam Rose, who I haven’t seen in a long time and really enjoy. Adam immediately acknowledged the elephant in the room.

Adam: I heard the news…I’m really excited to see how they wrap things up. It’s great they get a year to do that.

What are Aaron and his Gollum up to?

Adam: Last time we saw Aaron and his Gollum they were at a disco in Germany so I feel like they’re having fun. 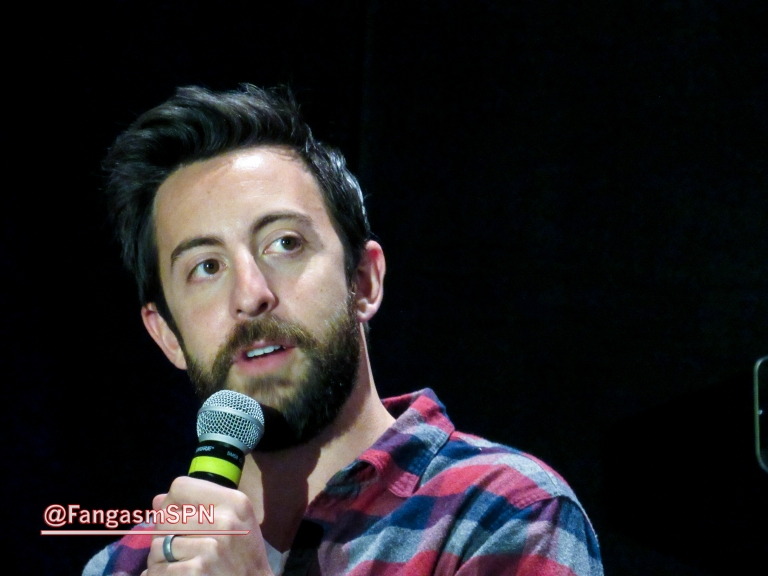 He’s also up on his Supernatural memes, including the one he stars in from his episode.

Adam: Oh my god these guys are psychopaths… I love that meme!

Adam was not spared some J2 pranking on set.

Adam: I’m doing this intense scene with Jensen and I see Jared pop up (off camera of course) holding this paper with a phallic object on it. I cracked up. So then, 13 takes later…

END_OF_DOCUMENT_TOKEN_TO_BE_REPLACED

When my agent suggested that I have a party to celebrate the release of Family Don’t End With Blood: Cast and Fans on How Supernatural Has Changed Lives, I was skeptical. Who does that? Not unknowns like me, that’s for sure. Who would come? Would I just be standing in a Barnes & Noble tossing confetti up in the air in an empty room? But the more I thought about it, the more I wanted to celebrate this book that was two years in the making. This book is not mine – it belongs to all 25 contributors who wrote from the heart and poured their genuine emotions into their chapters, both fans and Supernatural cast. For most of them, it wasn’t an easy task. They are students and business women and moms and IT consultants. They are talented actors. But they are not, for the most part, writers. Or at least they weren’t before they said yes to contributing to this book!

I know the process was heartwrenching and intimidating for many of them. They are all people who care a great deal about this show and this fandom, and they didn’t want to let anyone down. Although they didn’t have much confidence about their writing ability, they felt it was important to share their stories – and so they persevered. Through self doubt and starting over and edits and a lot of hard work, they kept going. The result is no less than amazing to me. Every single contributor wrote something that speaks to others – that inspires others. The courage they showed in telling their real truth, in print, for the rest of the world to read, blew me away.

So I decided the wise and wonderful Amy Tipton was right; we would have a book release party. Now to figure out when and where and how. Which turned out to be a story in itself, so I thought I’d share the before, during and after of our rather unique celebration of #SPNFamily.

END_OF_DOCUMENT_TOKEN_TO_BE_REPLACED 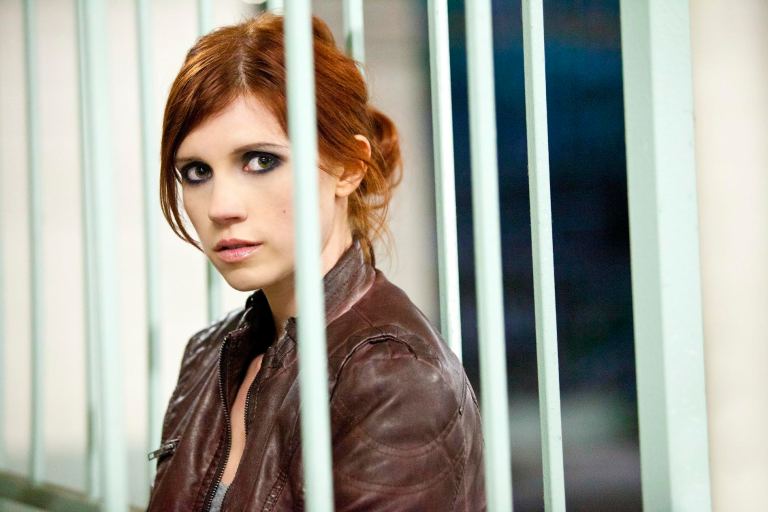 I had the pleasure of chatting with Supernatural’s angel Anna, Julie McNiven, last week about her new project (Internity) which turns out to be entirely relevant – to both Supernatural and fandom! Although we’ve seen Julie at several conventions, we’d never had a chance to interview her – plus, Julie is one of the kickass women of Supernatural on board for the SPN Ladies Con (@LadiesOfSPN), so it was an extra special treat to talk with her.

END_OF_DOCUMENT_TOKEN_TO_BE_REPLACED

Our weekend at the Chicago Con brought a surreal feeling of coming full circle – in a wonderful way. Chicon was our very first Creation Supernatural con, way back in 2007 (SPN wasn’t even popular enough to warrant its own convention then, so we shared it with a few Buffy and Angel alums). We did the first interviews for our book here, and met one of our favorite people, Richard Speight, here. Back then, we didn’t know if our little book on Supernatural and its amazing fans would ever come to fruition, and we had no idea the circuitous route it would take to finally get published. It seems fitting that Fangasm: Supernatural Fangirls was published this month, and here we are back in Chicago once again. It seems even more fitting that Richard is here too, along with two of the photographers who contributed their beautiful photos to the book, Chris Schmelke and Lizz Sisson, and of course quite a few of the actors whose interviews are some of the best parts of Fangasm – Jared, Jensen, Misha, Matt, Richard and Samantha. What we could never have anticipated is that everyone connected with our favorite Show would be so supportive, let alone that they’d all actually read it!

END_OF_DOCUMENT_TOKEN_TO_BE_REPLACED

We’ve been loving all the great reports from VegasCon, and the amazing photos that have been posted – thank you, fandom, for always sharing the pretty. This con had so many great moments, both onstage and off. We caught up with fangirl and fanboy friends from all over the world, relishing in the ability to have actual face to face conversations over lunch instead of just exchanging 120 character tweets or occasional email or facebook exchanges. Cons are wonderful for the chance to see the guests up close and sort-of-personal, but they’re at least as wonderful for the chance to connect with other fans and share your enthusiasm for Supernatural.