I had no intention of going to the Supernatural convention in Denver, but somehow I ended up there anyway. I’d missed the previous Denver convention so had never had a chance to bring Family Don’t End With Blood to Colorado, and that alone was enough to convince me to go. Add to that the fact that I love Colorado, where my aunt and uncle lived for much of my childhood, so I have wonderful memories from all over the state. And I wanted to meet new SPNFamily member and friend Kaci Marie Lister, who I ‘met’ virtually when I was in Austin for Supernatural Day. So off I went to beautiful Colorado!

The west coast fires had created so much ash in the atmosphere that it mostly obscured my view of the mountains, which was a shame. But the weather was beautiful and I was amongst my SPNFamily, so that more than made up for the lack of mountain views. I met up with Kaci and her friend for dinner and to do a little vlogging, since she was doing a vlog of their exploits at the con, and I caught up with my on-the-road buddies Liz and Kristen for pizza, who I miss tons when we don’t get to hang out for a period of time. It was wonderful to be able to spread the word about Family Don’t End With Blood to so many people who hadn’t heard about it too. This was a repeated conversation.

Me to someone perusing the table with a quizzical expression: Have you heard about the book? This is the one that the Supernatural actors wrote chapters for…

Thanks to everyone who came back to the table the next day to tell me that I ruined their sleep because they couldn’t stop reading it. Blame all those actors and fans who wrote the compelling chapters!

Friday kicked off with Rich and Rob and Louden Swain, and a bunch of non G rated banter, including a song about Misha, Rob’s b-hole and you, and something about microphone condoms, which prompted me to tweet with #OffTheRailsAlready. And it was only Friday! 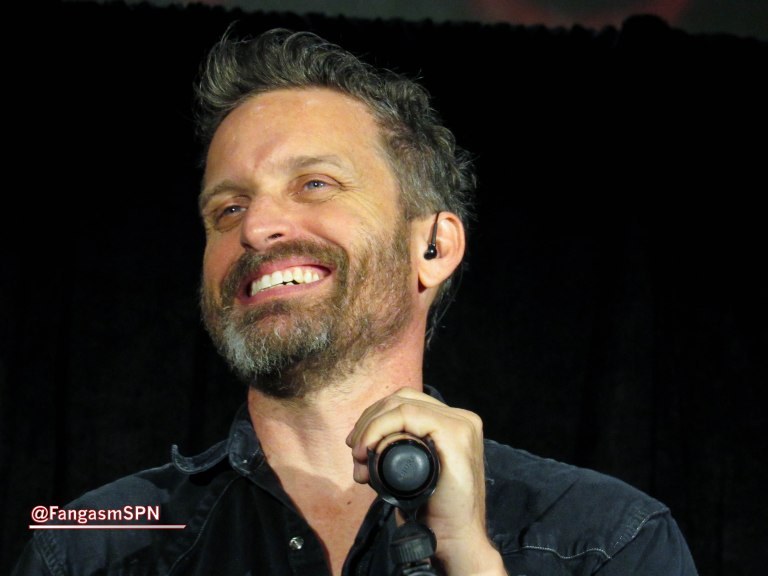 I really loved the ballroom for Denver, which was smaller than the giant rooms I’m used to – it brought back memories of the early cons and felt cozy and a little more intimate (as intimate as you can get in a ballroom full of people…)  Richard looked around at the giant stage banners that are always in the room – this room was smaller, so the banners were closer.

Richard: Why are the stage banners staring at us? Jared is undressing us all with his eyes, and Jensen is like, why are you all undressing??

Denver was also notable for being the first (of many?) cons during which a fan asked pretty much every guest to take part in a giant game of Mad Libs that spanned the whole con. I got a kick out of watching people’s faces when they got the dreaded “adverb”. lol