Twenty three more Supernatural episodes to go, and counting. Last week’s ‘Game Night,’ written by Meredith Glynn and directed by John Showalter, was the first episode I watched knowing that the Show was coming to an end, so I think I was even more attentive than usual. As in, nobody should say a word to me while I’m relishing every last second of my favorite show for the next solid year! It wasn’t a perfect episode, but it was a wild rollercoaster of both action and emotion, and that means I enjoyed it – and was grateful to be able to see a new episode. That’s going to be the case from now on in, but I’ll probably still find things to quibble about in the midst of my relishing. Okay, make that definitely.

The ‘Then’ includes Nick, which made me groan because I’m just over that story line and the inevitable tie-in to Lucifer (as is about 99.9% of the fandom, but apparently that news has not reached the network). The ‘Now’ begins with someone baking cookies and for a split second I thought it was Dean doing some nesting in the bunker, but nope, it’s Donatello humming and baking in his cozy kitchen. I really like Donatello so when the doorbell rang I started shaking my head immediately, even before he wound up tied to a table with a gigantic hypodermic needle poking into his neck. (I closed my eyes but his screams were still audible). Ouch.

Back at the bunker, it’s Winchester Game Night. Dean is fixing his favorite childhood game, Mousetrap (aww), Jack is making Jiffy Pop on the stove and Mary’s got the beers. Sammy’s out picking up the pepperoni meat intensive pizzas and one with pineapple for Jack, over Dean’s objections. It’s a nice domestic scene which means things are about to go south in a big way. 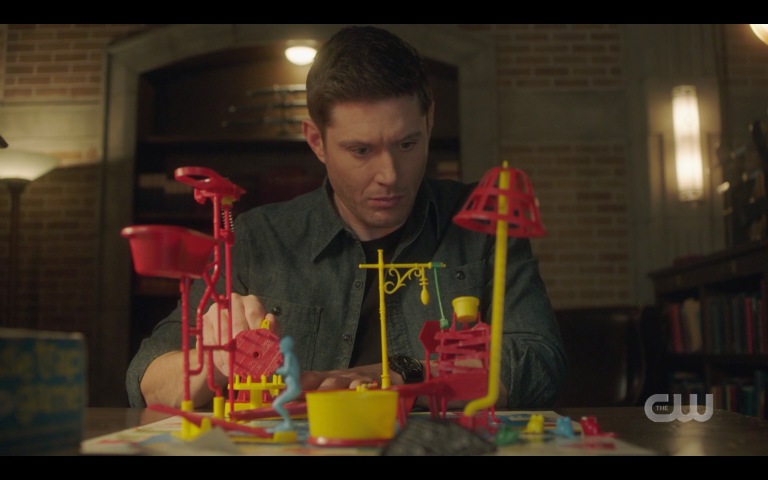 Sure enough, Dean gets a phone call pleading for help from Donatello.

Dean: So much for Winchester Game Night…

He tries to call Sam but there’s conveniently no signal – that’s Show’s favorite way of splitting characters up, oops, no service suddenly – so he and Mary head off with instructions for Jack to fill Sam in. (I do love that Sam’s voicemail says if you can’t reach him to ‘call my brother’ just like John’s always said ‘call my son Dean’.)

Once Sam gets back he says what I’m thinking – I should be there with you!

Dean assures him it’s okay, and Sam takes issue (me too, Sam).

Sam to Dean: Watch your back.

Winchester for love you, be careful.

END_OF_DOCUMENT_TOKEN_TO_BE_REPLACED

There was a new Supernatural episode last week even though in the US that day was the Thanksgiving holiday, which meant I was at a big family gathering and not in charge of what was going to be watched at 8 pm. Lucky for me, I have really considerate family members, because most of us ended up watching my favorite Show. However, I couldn’t exactly tell people not to make a sound (which is how I like to watch Supernatural. I mean, I make a lot of sounds, but the rest of the family should be quiet. What?) I kindly said “oh no, please feel free to keep chatting” when asked, even though I might have been gritting my teeth.

But it turns out that the episode was engaging enough that everyone ended up watching instead of chatting – thanks, I think, to Richard Speight Jr.’s directing. I’ve loved every episode Richard has directed, especially the last two, and especially especially ‘Just My Imagination’.  ‘War of the Worlds’, is not going to go down in history as one of my favorites, but thanks to Richard’s directing there was never a dull moment and I definitely wasn’t bored. It’s just that my favorite episodes have an emotional arc for the Winchesters, some of the brother moments I live for, some psychological insights into the main characters who I care about – something that grabs me and reminds me why I love this show. This episode didn’t have those things, but what it did have is excitement and surprises and reveals and some pretty epic fight scenes. Speight made sure all of that came through and kept me riveted.

We start out with strikingly beautiful images, which were so serene they didn’t look like they belonged on Supernatural. But it’s only Michael invading Lucifer’s brain to see what Earth is all about. Michael is not nice at all, which should be no surprise because angels on Supernatural are just about the most deplorable beings ever. Except for Castiel, who (as is pointed out in this episode) is truly a renegade. This fact about angels was quite confusing to the extended family members who decided to watch with me.

Family: Uh, I thought you said that guy Michael was an angel.

Family: Typical? And who’s that poor guy screaming and bleeding?

Family: Wait, the Devil? An angel is torturing the devil??

Me (silently) This was such a bad idea…