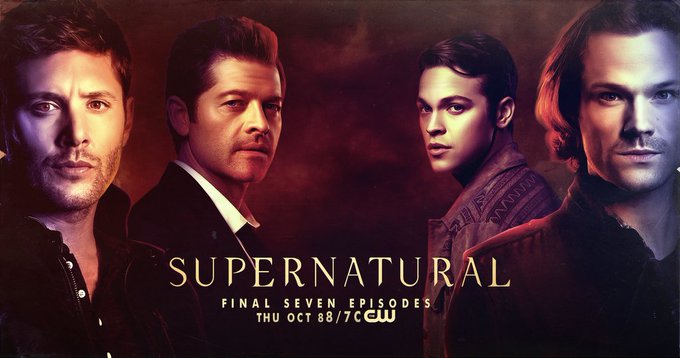 It’s Monday, which means it’s time for my Supernatural’s Final Run weekly wrap up – week two of filming! In keeping with my resolve to document every week of Supernatural’s last few months on the air – and, who am I kidding, in an attempt to save my own sanity as I try to deal with the fact that it’s ending – here’s the latest installment of ‘The End of Road: What Made Lynn Cry This Week’.

A lot, it turns out. Which is a surprise to no one.

First up, that poster in the header – created by @OfflArjun. Breathtaking.

And the CW’s new poster that came out last week too. The final seven episodes….  #Tissues

Jared and Jensen returned to the set a week ago to begin filming the final two episodes of the series. Fandom was overjoyed to see Sam and Dean back in the bunker but a bit devastated not to witness the ritual shaving of the hiatus beards and cutting of the long hair. We’ve been spoiled by often having Jared and Jensen take us along with them when they magically transformed back into Sam and Dean, but this time – whether due to COVID restrictions or the actors’ own strong emotions about this being their last time going through that transformation – we didn’t get to witness it. Mixed feelings were the order of the day. Excited to have them back to filming, which somehow made the world seem more right than it has in over five months, but sad that this means it really is almost over. And I confess to some grief about Jensen having to cut that long hair because mm mm mm. 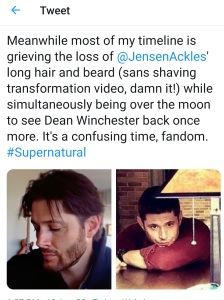 Also RIP to Jared’s beard and his entire look just before getting a trim. Mm mm mm again. Fandom is confusing right now, to say the least.

We did, however, get to witness Jake Abel shaving his hiatus beard and turning back into Michael, or Adam, or both. Jake also gave the fandom the most amazing treat – a video series called ‘Jake And Quarantine’ that documented his fourteen day quarantine in Vancouver that was so scary in the beginning it could have been an actual episode of Supernatural! If you haven’t watched it, please do. You’re in for a treat.

We also got a few spoilery photos from Jake, so skip this next little section if you’re spoiler free – though I think the entire fandom knows this one.

SPOILERY PARAGRAPH: Jake posted photos of his trailer and the one next door, both marked  ‘Choose your fighter – Michael or Lucifer’. There was mixed reaction – let’s just say that Lucifer is not the character many fans were hoping to see again. Fingers crossed that it’s to finally defeat him once and for all (which I thought had already happened. But this is Supernatural…)

We also got a new promo still from an upcoming episode which made its way around the internet. I relish that too, realizing how spoiled I am with the constant new content we have gotten about this show for such a long time. The internet will be quieter – and a lot less exciting – once Supernatural no longer graces all my timelines constantly.

Misha Collins, whose presence online has been blessedly consistent during these past five months, did an Instagram live with former Presidential candidate Andrew Yang earlier in the week, which I was able to tune into. Once again, I was struck by the fact that so many unexpected people are Supernatural fans. While Misha reassured Andrew that you “couldn’t be too big a geek” when talking to people from Supernatural, Andrew excitedly referred to Misha as “a real life superhero”.  They clearly got along well, and it was a lively and informative discussion, reinforcing the importance of having a voice and using it to vote. Jensen Ackles hopped online to watch during a break from filming, after he and Jared Padalecki joined Misha for a conversation with another former Presidential candidate, Cory Booker, the week before.

Meanwhile, filming resumed. For this small amount of time, it’s almost felt like things in the Supernatural fandom went back to “normal”. Every day there are little things that remind me that they have only a few more weeks of filming, though, and that reminder makes my breath catch every time, brings a fresh pang of pain. At the same time, it always brings a profound gratitude too, for all these talented people who have cared so much about this little show and helped to make it so wonderful. I asked Jensen a little while ago if the crew that is so much a part of making the show what it is were able to come back and he said that luckily yes, most of them could. I imagine that means so much to the actors who trust their talented crew completely, and value being surrounded by professionals who care about the show as much as they do and know it just as well.

Because filming has resumed, the crew and producers are also coming to terms with the reality that this is the beginning of the end. Many of them have been with the show since the beginning, and it has been as much a part of their lives as it has been for the actors. I’ve been acquainted with some of them for over a decade, so every time I see someone post about their gratitude to the show or fandom, or document a ‘last time’, my emotions are in overdrive. Yes, this goes under the category of ‘things that made Lynn cry’.

Even before last week, some crew were back already and tweeted photos, including Mikaela Bree from Makeup, who posted an IG video of the safety precautions they have in place. Proud of our little Show. As Jake Abel tweeted: Thankful for the #Supernatural crew this week. Masked-up for 12 hours a day and still making a kickass show!

Last week location scout Evan Tran posted this photo and tweeted: That’s a wrap for me on #Supernatural. I wish I could continue on this #amazing show. #SPN has given me many positive experiences, and I’ll always be grateful. Thanks #SPNFamily for one last ride. #SPNFamilyForever #SPN15 #EndOfTheRoad

A few days ago I read VFX supervisor Mark Meloche’s emotional tweets about how proud he is of the show and grateful for the fandom.

@rotomonkee: #SPNFamiIy Back at it & proud of WB and crew who are taking SPN safety VERY seriously! Covid-19-b-damned… If I catch it it won’t be from filming the finale of the SPN legacy! SO much love to you all .

I tweeted back: So proud of this little show and so emotional about its ending. Kick it in the ass!

Mark replied to my tweet, and his response made me even more emotional.

@rotomonkee: Thank you! Full disclosure: I cried reading the last episode. I well up thinking abt the respect genuine love this #SPNFamily journey has shown me & the wonderful souls I’ve encountered along the way, manifested from a show about love & extended family.

Ain’t that the truth.

Stef, props seamstress and on-set dresser, who I’ve had the pleasure of chatting with at some conventions (and who has been responsible for some incendiary photo shoots of Jensen Ackles in her brilliant costumes, as Red Hood or Batman for example) posted a heartfelt tweet documenting her own path to acceptance.

@arachnobite: Over the past five months I’ve definitely trained for this day. The MOL set has served an incredible purpose. It has been a much beloved and viewed set. It has been a joy to call it a second home, and now it is time for something new.

In case you forgot:

And on-set props assistant Maisie, who I’ve known for a very long time, tweeted “I’m going to miss this set…” with a photo as she arrived to work for the day. It’s been wonderful to see Maisie hard at work on the set when I’ve visited, and to know with absolute certainty that she loves the show as much as I do. 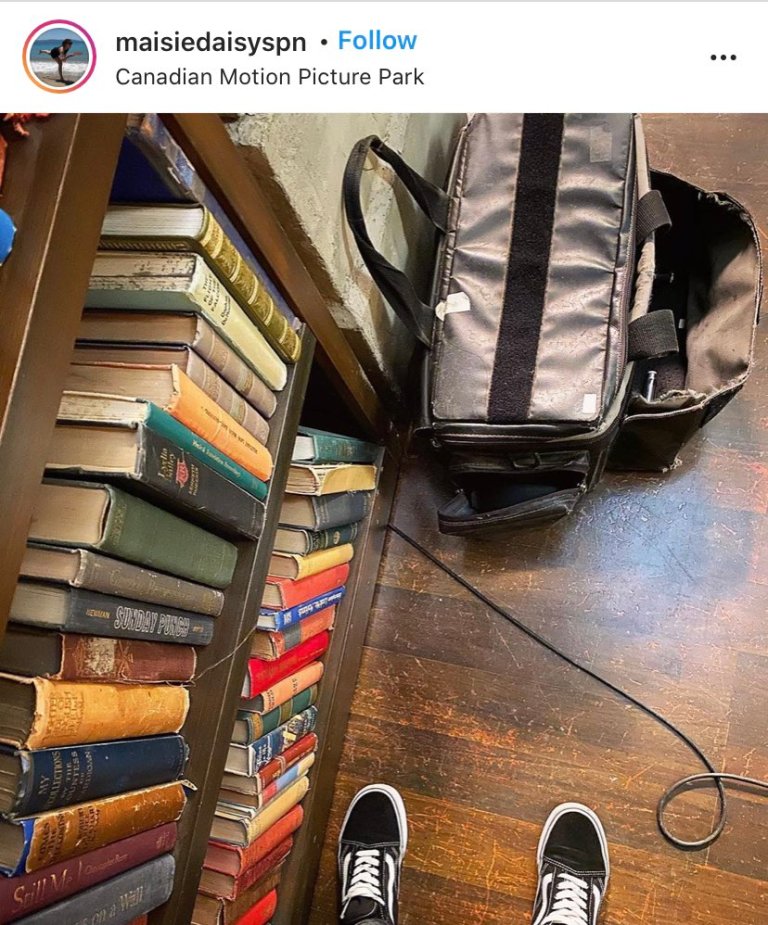 Misha Collins’ birthday was on Thursday of last week, so that meant a day of emotional posts about Misha and Castiel and the difference both have made for many fans. I got nostalgic and posted about my favorite moments with Misha over the years, along with some pretty pretty pictures of Mr. Collins.

His castmates sang happy birthday to him even though he wasn’t on set, with the SPNTapeBall dressed up as a stand in, and SPNTapeBall shared the video on social media. Knowing it was the last time they’d do that gave me a lot of feelings. Them too, I’m sure, which is why they also had to make it goofy and playful. Misha got the point though, I’m certain. We all know how much they care about each other.

It was bittersweet watching the cast and crew all gathered together, goofing off and ribbing each other as they’ve done for the past decade plus, and know that it will likely be the last of their birthdays they will spend filming Supernatural. I can think of so many celebrations over the years that have been shared with us (because we’re a damn lucky fandom) – from the set, from location filming, from convention stages. This cast and crew have been a family, celebrating life milestones together as families do. It’s hard to imagine that most of them will not be together for those celebrations going forward. Jared and Jensen both touched on that in their chapters in There’ll Be Peace When You Are Done – how much the entire crew and cast have become family, how many of those milestones they’ve celebrated together or consoled each other through. Birthdays, weddings, children. Illnesses, divorces, hard times. They’ve been there for each other for over a decade. Though the heartfelt things that Jared and Jensen included in their chapters express tremendous gratitude for that, it will also be a lot to lose as the show comes to an end and people go their separate ways. Nevertheless, it’s clear that none of them would trade a second of what they’ve had – their chapters, and all the chapters in Peace, celebrate just how special this wild ride has been.

It’s Monday now, and filming has resumed, and once again it feels like all is right with the world knowing that. I’m hoping we get some glimpses behind the scenes this week too, and I’m hoping the cast and crew are all savoring these last few weeks of working together. I know they are all giving it everything they have to make these final episodes something they can be proud of and we can take comfort in.

That’s why we put together There’ll Be Peace When You Are Done  too – something to hang onto, to remember this wild ride, to celebrate how special Supernatural is and always will be. Everyone who has a chapter in it, both actors and fans, hope the book will be a comfort and an inspiration. We are, after all, so lucky.

As some of last week’s Quotes of the Day (thanks to Jason Fischer and Emma Peterson) reminded me. I will miss the QotD so damn much. 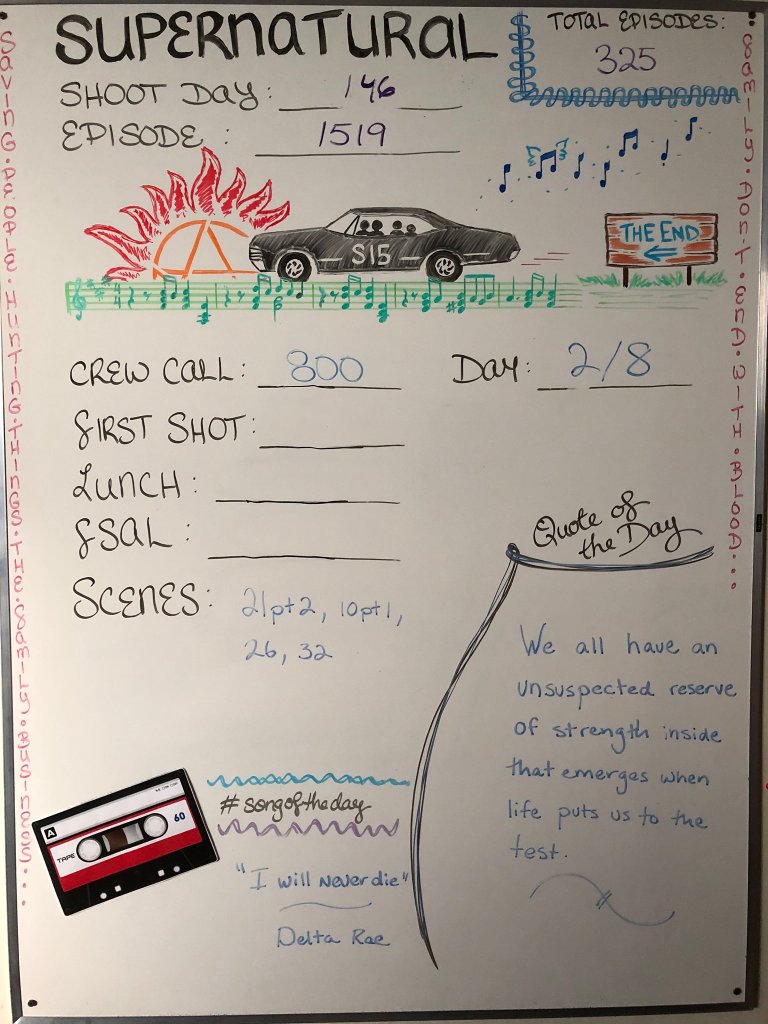 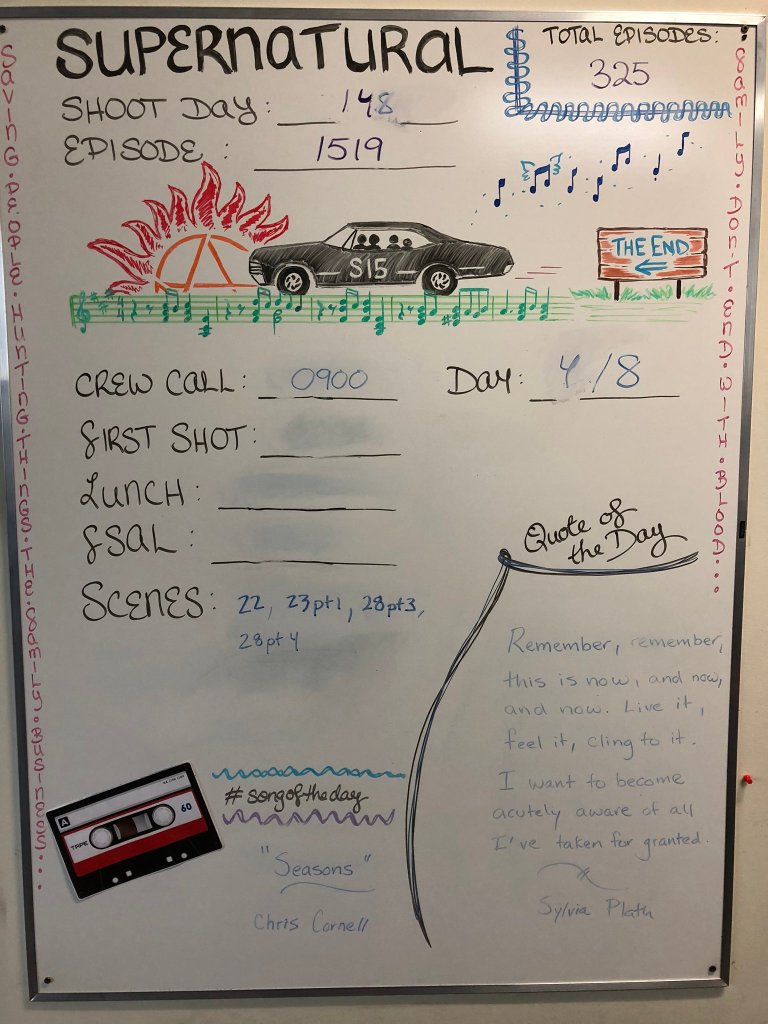 Good thing I stocked up on those tissues.

You can find There’ll Be Peace When

You Are Done and Family Don’t End

With Blood at peacewhenyouaredone.com

Or at the links on the home page.