It’s been an emotional rollercoaster of a week for the SPNFamily. The Supernatural season finale is tomorrow, and we had all watched Jared and Jensen and Misha and the rest of the gang onstage at Asylum (on video at least) in between gnashing our teeth and sobbing about Show. When Jared tweeted that he was in desperate and urgent need of his family and had to head home before JIBCon, and then asked fans for a few seconds of time to write him, tweeting that “I need all the love I can get right now,” fandom responded by coming together in a way I don’t think I’ve ever seen before. We’ve followed and written about this amazing fandom and Show for almost a decade, and have seen countless examples of fans supporting the Show and the cast and crew and each other – but not on this scale. I’m still in awe.

@TravisAaronWade: For our friend @jarpad Hoping this warms your heart and puts a smile on your face brother (then he posted a little vid clip).

Jensen kept fandom informed from onstage in Rome, speaking about his friend and brother Jared with so much respect and endless empathy.

He even sang him a song from JIBCon. Thank you, fandom, for posting these vids from Rome so we could all share this!

Jensen made sure that Jared understood – and we all understood – how important it is to take care of yourself when you need to. He, and Misha and Stephen and Travis and all the other actors expressing their support made it clear that sometimes it’s the people with the biggest hearts, who give the most to others, who have trouble absorbing that same help and caring for themselves. This sort of response from Jared’s colleagues and fans to his courage in reaching out was the most powerful shame-busting weapon any of us could wield. It’s not how things always go in this culture, unfortunately. But Jared had the guts to ask for help, and everyone – his colleagues, his fans, even some of the media – stepped up to the plate to respond. Not with shaming, but with empathy and respect and SO MUCH LOVE.

Fannish creativity, which we’ve written about alot in our books, was part of the amazing response in support of Jared. Fans made beautiful, inspiring vids like this one by @LivinLife89 –

They created #AlwaysKeepFighting bracelets and clothing magnets and tee shirts, with some of the proceeds going to the charities that Jared’s campaign supports. 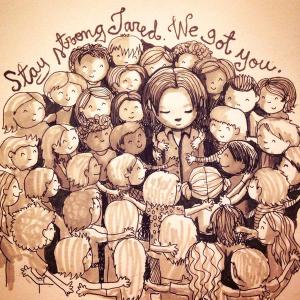 Fandom organized to get their messages of support out to Jared too. There’s a group ecard that fans can sign, which has an amazing number of signatures already.

There’s an AlwaysKeepFighting post on Tumblr where fans can leave messages of support and share their own stories of how they’ve kept on fighting too.

There’s a lovely message of support to Jared and a link for posting fans’ own supportive stories.

A fan (thanks @twinnmouse) helpfully posted the information for where fans could write to Jared at his management office.

Through all these channels and projects and many more, support and love for Jared started to pour in. But fandom wasn’t done being awesome.

One of the things we were most impressed with when we discovered Supernatural fandom and started writing books about it was the sense of community. Fans don’t just care about and support the actors on their favorite Show (though we certainly do that!), they also support each other. We may squabble and disagree on where the Show should go or how to interpret its bits and pieces, but at the end of the day, we’re all fans. We’re united in how much we love Supernatural, and we’re united in being a wee bit outside the mainstream in what we love and how we do it (as Robbie Thompson would say, different and not giving a shit!). Fandom, above all else, is a community. We get to know each other here; we come to care about each other here.

So it shouldn’t be surprising that fandom also came together to support each other. Many of us have also struggled with pushing ourselves too hard, not asking for help enough, being overwhelmed with the challenges life throws at us. We’ve felt depression, we’ve struggled to keep fighting. Watching Jared go through this creates a great deal of empathy in anyone who has also struggled, and fans did not forget about each other.

The SuperWiki posted a thoughtful summary on Tumblr of how fans could support Jared, along with an important reminder of how to take care of ourselves. The post included an acknowledgement that sometimes people outside fandom don’t entirely understand the depth of our investment in fictional characters or the actors who play them, missing the point that much of what we gain from fandom comes from each other and the supportive community we’ve built around our common love of a television show.

On LiveJournal, an epic Love Meme was started, inspired by the AlwaysKeepFighting message and fandom’s support of Jared. Thousands and thousands of fans posted their love and support of each other, at a time when many fans really needed it.

Yesterday, Jared tweeted a response of gratitude for all the support coming his way.

@jarpad: Thank you, from the bottom of my heart and soul, for your love and support. It’s going to good use. All of my love and #AlwaysKeepFighting

As Jim Beaver pointed out in a recent post, it’s sometimes very hard to reach out and ask for help. Especially if you’ve been culturally encouraged not to, which is how many of us, both men and women, were raised. Jim also allowed himself to express some vulnerability recently, and then found himself feeling ashamed afterwards. He was courageously candid in sharing both the initial vulnerability and his struggle to fight off the culturally prescribed shame afterwards. I’m so glad Jared was able to shrug off those often irrational messages too and reach out, and that he’s able to take in the love and support he received in return. He’s embodying so much of what the #AlwaysKeepFighting campaign is about. Don’t stay silent. It’s damn hard to reach out and ask for help, because it does make us vulnerable, and if you’ve been hurt in the past, that’s terrifying. But it’s the only way people know you need that help. And sometimes, if you take that chance, what you get in return is what keeps you going.

Jared clearly chose his friends wisely, judging from their unqualified support and the understanding they’ve expressed. I feel like all of us in the SPNFamily chose well too. We chose the right Show to fall for – and the right fandom to belong to.

I know tomorrow will probably require 200 boxes of tissues and someone (or a million virtual someones) to hold my hand through the season finale, but right now I’m sniffling for a different reason. SPNFamily. It’s more than just a hashtag. So much more.

Thanks for inspiring us, Jared. Keep fighting.

For more SPN fandom love, our books are
available at the links at the top of the page

36 thoughts on “What the SPNFamily is All About: Always Keep Fighting, Jared!”