It’s been a whirlwind and very Supernatural-centric week – which is of course the very best kind. First the 100th Creation Supernatural convention in New Jersey (lots more about that soon) and then a wild and wonderful Monday in New York City to celebrate the Season 14 premiere of the show — with Jared Padalecki and Jensen Ackles!

For once living on the East coast was a benefit instead of a liability, so I went all out to try to get tickets to Entertainment Weekly’s screening of the Season 14 premiere and to Live with Kelly and Ryan for Jensen’s appearance on that show. Getting tickets to both NY events was a lot like the early days of Supernatural cons, where fandom would wait hovering over their keyboards (yes, at the time we didn’t use our phones for everything) constantly hitting refresh waiting for tickets to go on sale so we could grab the best seat. When Entertainment Weekly announced that they would be hosting a screening of the Season premiere episode on October 1 in NYC, and that it would be offered only to existing subscribers, I was ecstatic. I’ve been a subscriber since before Supernatural was on the air, and I’m within driving distance of the Big Apple, so I eagerly awaited my email on the day they were to go up for grabs – and waited – and waited. Nothing! I’ve lost none of my fangirl propensity for getting emotional when it comes to my favorite show, so I promptly freaked out and started frantically tweeting the universe trying to figure out why I hadn’t gotten an invitation when I was seeing people happily proclaiming that they already had their tickets! It was like fangirl hell for a while there – but the lovely Sam Highfill replied and an equally lovely person from EW helped me out as well as several of my awesome fellow fans and all was well eventually. Phew!

My friends Liz and Kristen and I got approximately 2 hours of sleep on Sunday night after working our butts off at the con, but getting up at 4:45 am is a lot more doable when you know you’re going to see Jared and Jensen and the premiere of Season 14 if you do! We headed out into the dark and made it into the city by 6 am, where we joined a small group of fans to wait for the Live show to let us in. We weren’t lucky enough to be Priority, which meant we had no idea if we would actually get in or not – there were no guarantees for us general admission folks. But there was a Starbucks a few blocks away and lots of fellow fans to chat with, so the wait wasn’t too bad. We watched the sun come up over the city, and even got to tape a little promo with Ryan Seacrest. No clue if it ever aired anywhere, but it was fun anyway. 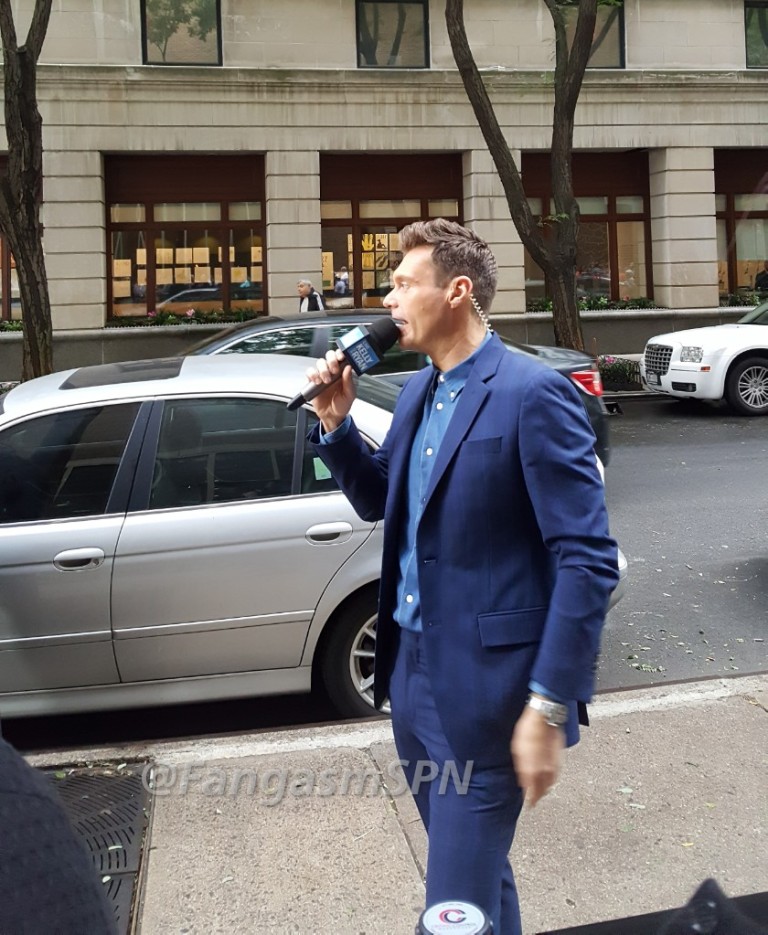 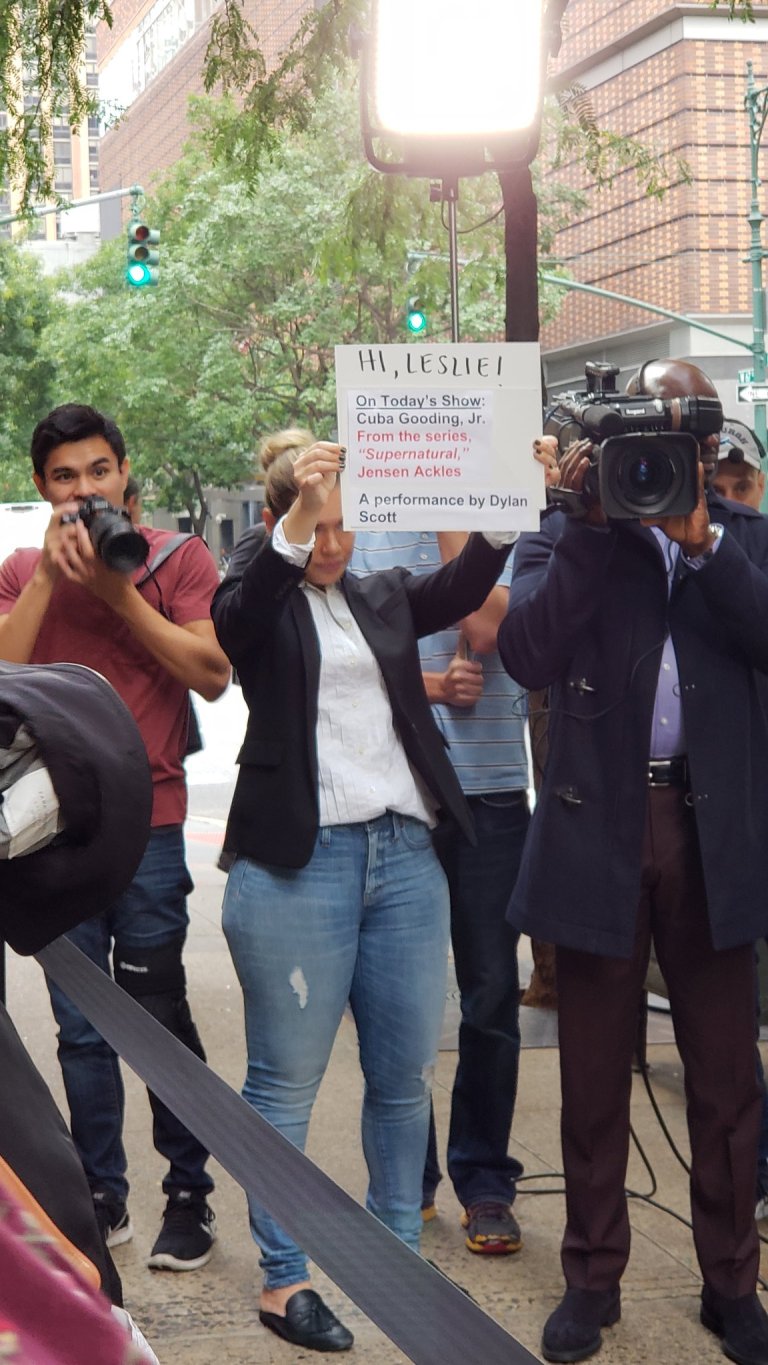 I didn’t actually relax until we managed to get inside the studio, and even though our seats were way off to the side, I was incredibly grateful just to be there. (I also haven’t done the whole studio audience thing, so the experience was fascinating). We were right by the entrance door to the studio, so we saw Clif appear and knew the fun was about to begin! Danneel and JJ came through the studio first, Danneel holding JJ’s hand as they crossed over to the other side to watch the taping, and that got a huge ovation from the Supernatural contingent of the audience. We were coached on hand signals that meant “clap” or “clap more” or “add some hoots and hollers” but when Jensen finally appeared, we didn’t need any coaching – our section of the room burst into screams of joy.

Jensen high fived fans as he came in, and clearly we were all VERY happy to see him!

END_OF_DOCUMENT_TOKEN_TO_BE_REPLACED

There’ll Be Peace When You Are Done - Available Now, wherever books are sold! @benbellabooks . . . #There’llBePeaceWhenYouAreDone #PeaceWhenYouAreDone #Supernatural #spn #spnfamily #spnfandom #spnfamilyforever #jaredpadalecki #padalecki #samwinchester #jensenackles #ackles #deanwinchester #mishacollins #castiel #somanyauthors #prettypictures #gorgeousart
Thank you @benbellabooks for all of your support! #PeaceWhenYouAreDone . . . . #Repost @benbellabooks with @get_repost ・・・ There’ll Be Peace When You Are Done: Actors and Fans Celebrate the Legacy of Supernatural, edited by the amazing Lynn S. Zubernis, is an emotional look back at the beloved television show Supernatural as it wraps up its final season after fifteen unprecedented years on air. We're so happy to share that it's out today. 👻⁠ ⁠ With heartfelt chapters written by both the series’ actors and its fans—plus full-color photos and fan illustrations—There’ll Be Peace When You Are Done traces Supernatural’s evolution, the memorable characters created by its writers and brought to life by its talented actors, and the many ways in which the show has inspired and changed the lives of both its viewers and cast.⁠ ⁠ Both a celebration of Supernatural and a way of remembering what made it so special, this book is a permanent reminder of the legacy the show leaves behind and a reminder to the SPN Family to, like the series’ unofficial theme song says, “carry on.”⁠ ⁠ Including contributions from: Jared Padalecki (“Sam Winchester”) ▪️ Jensen Ackles (“Dean Winchester”) ▪️ Misha Collins (“Castiel”) ▪️ Andrea Drepaul (“Melanie”) ▪️ Carrie Genzel (“Linda Bloome”/”Linda Berman”) ▪️ Julie McNiven (“Anna Milton”) ▪️ Tahmoh Penikett (“Gadreel”) ▪️ Shoshannah Stern (“Eileen Leahy”) ▪️ Brendan Taylor (“Doug Stover”) ▪️ Lauren Tom (“Linda Tran”) ▪️ And many more!⁠ ⁠ Learn more and get your copy at the link in our bio.⁠ ⁠ --⁠ ⁠ #spnbook #supernatural #deanwinchester #samwinchester #spnfamily #castiel #supernaturalfamily #spnfandom #jaredpadalecki #mishacollins #jensenackles #alwayskeepfighting #akf #lynnzubernis #bookworm #bibliophile #reading #booknerd #booklover #book #bookish #bookaddict #booklove #instabook #igreads #instareads
Thrilled to have @leemajdoub in our new book There’ll Be Peace When You Are Done #PeaceWhenYouAreDone . . #Repost @leemajdoub with @get_repost ・・・ Just got my copy of "There'll Be Peace When You Are Done." I'm honored to have contributed to this book and share my experience playing Hannah & being welcomed into the #spnfamily @cw_supernatural Thank you @fangasmspn Join us on Wednesday at 9pm EST / 6PM PST for a virtual book launch! Info & contributors are in the next picture! #SPN #Supernatural #Hannah
Great reminder - The glass is definitely half full! . . #Repost @familybusinessbeerco with @get_repost ・・・ Given the current set of circumstances it’s easy to feel down. But there are still so many things to be thankful for. Let’s take time to remember the “glass is half full” . . . #jensenackles #ackles #deanwinchester #supernatural #spn #spnfamily