Holding onto the light.

When I was asked to write an entry for the #HoldOntoTheLight campaign, I thought a lot about that phrase and what it means. It seems appropriate for my own experience with the ups and downs that life throws at all of us, but for me the words also have multiple associations. And the first day of a new year seemed like an appropriate time to write about holding onto the light and what that means to me. It is, after all, what we’re all trying to do this year.

The first thing I thought of when I read the hashtag #HoldOntoTheLight was less a thought and more a picture – a streaming video of the many clients I’ve worked with over the years as a psychologist. Images of people – all sorts of people – breaking down, falling apart, reaching out. Getting up, getting through, getting past. Lots of tears, but lots of smiles too. Sometimes the journey, which it was always a privilege to share, was all about not just holding onto the light, but finding it in the first place. When you’ve been in the dark a long time, that’s not an easy thing to do. Sometimes that’s where I came in, a co-traveler in the search for whatever would light the way and warm the heart. The images are full of heartbreak and pain, but they are also full of amazing courage and persistence and sometimes – the best times – of finding that warmth and light. Every single person taught me something, and I’m forever grateful. I don’t talk alot about my work outside of writing, but I love what I do and am continually inspired by the amazing human beings I’ve met along the way.

The second thing I thought of was my own experience of holding onto the light at the times in my life that were the darkest. (And yes, it’s probably significant that I didn’t think of my own experience first – you can analyze me later). It’s an image too; me on my knees, feeling unable to get up. Terrified of being alone and ready to give up. At the worst of those times, it was only the awareness that there were two little children depending on me that got me off my knees and forced me to put one foot in front of the other.  People often refer to me as an “upbeat” person. I’ve been called a relentless optimist, someone for whom things “roll off my back”. Some of the time, that’s even true. But probably not as often as it seems. I was the oldest child in my family, and I understood from a young age that I was the one who was expected to take care of everyone else. Sometimes that included my mother, on the days that were the worst. That’s a hard lesson to un-learn, and one I still struggle with every day. When you grow up with uncertainty about being taken care of, the fear of being abandoned never really lets go; when it actually happens, one way or another, that’s when you end up on your knees.

Eventually, I got up. I got help. I found therapy long before I became a therapist myself, astounded that maybe I didn’t have to “do it alone”. It felt utterly foreign to be the helpee instead of the helper, and I fear I wasn’t the most proficient client at allowing help, but I had some persistent therapists who didn’t give up on me. I thought of them when I walked across the stage myself years later and the doctoral hood was slipped over my head; that PhD was as much a testament to their relentless insistence that I was neither helpless nor hopeless as it was to hitting the books so goddamn hard. It was dark for a long time, but eventually – with help — the light came back, and I’m still holding on.

The third thing I thought about was also an image. San Diego Comic Con, 2015. The gigantic cavernous Hall H packed full of people, all fans of my favorite television show Supernatural. As the stars of the show took the stage, the lights went low and the room suddenly lit up. Thousands of points of light illuminated the room, held by the fans. In my hand, I held one too, on the verge of tears because of the message it conveyed. As Jensen Ackles, Misha Collins and Jared Padalecki looked out over the spectacle, not understanding, we all began to chant: Always keep fighting. Always keep fighting.  Jared Padalecki understood suddenly; his eyes grew moist, and he picked up the little plastic candle that he too had been given, hand over his heart, clearly overwhelmed. Always keep fighting is the slogan that Jared coined for his Represent campaign to bring awareness to suicide prevention. He also bravely acknowledged that he too had struggled with depression and had to fight to keep going. That day we all held onto the light – for Jared, and for ourselves. 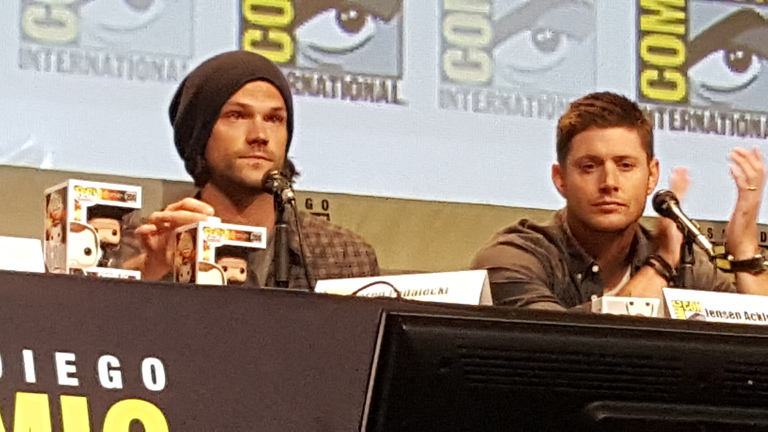 That day in Hall H and those little lights of hope were an inspiration, and here my story and Jared Padalecki’s story converge in an unlikely way.

When things were very dark in my life, I found the strength to keep going by finding something that I loved and allowing myself to enjoy it. One of those persistent therapists I mentioned had the good instincts to ask me what I was passionate about (it’s a question I’ve asked countless clients over the years since). I remember it was hard to tell her, because the answer was a television show and that seemed like the silliest thing ever. I reluctantly admitted it, and practically fell off my chair when she asked if I ever wrote fanfiction. WHAT??  My therapist knew about fanfiction?! That opened up a lot of good therapy, but it also encouraged me to hang onto my passions and start celebrating them instead of being ashamed of them.

That’s how I wound up writing books, once I was a psychologist myself, on why being a fan is a healthy, positive, life-enhancing thing and why the sense of community found in fandom can be life-saving. As I wrote book after book about fandom, most of them focused on the television show I continue to adore, I met countless other fans whose lives had been changed for the better by the show and the fandom. I also got to know the actors who star in the show as they contributed their insights to the books, and was surprised to learn that their lives had also been changed – sometimes saved – by the show and the support of the “SPNFamily”. Thinking back to how impactful it was for me to have my therapist’s encouragement, I decided to put a book together full of the inspiring stories of how loving a television show and being part of a fandom had helped people through all sorts of challenges. Depression, anxiety, addiction, debilitating self doubt, contemplating suicide. The show and the fandom had helped both fans and actors confront those issues and more. That’s the story I wanted to tell in Family Don’t End With Blood.

This brings me back to Jared. He’s the star of that show. A celebrity. It’s difficult enough for those of us who are not famous to talk openly about mental health challenges; it’s a million times more difficult for a celebrity. But Jared knew that if he had the courage to write about the times he’d been low enough to almost give up, that it would make a real difference. I was tremendously honored that he trusted me enough to include his story in Family Don’t End With Blood. His chapter is more than thirty pages long, it took him almost two years to write, and it doesn’t pull any punches – it tells it like it is. Even when that’s Jared on his knees – literally — unable to get up and thinking about ending it once and for all. That openness has made all the difference for other people reading his chapter who have felt the same. Always Keep Fighting is not a slogan he made up, it’s his own experience. A message to himself as well as to everyone else. 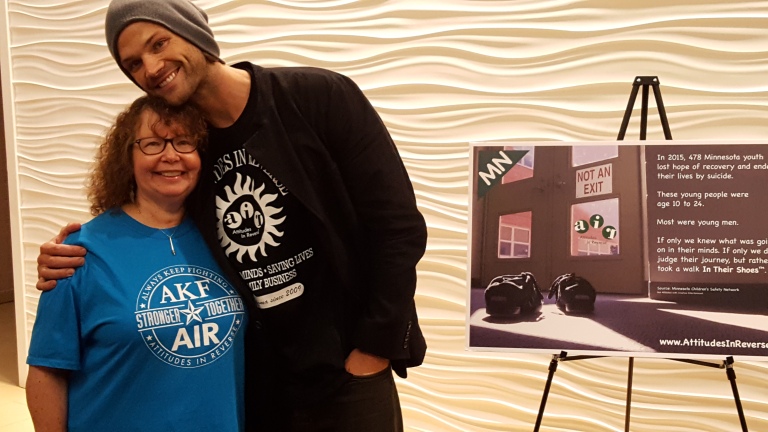 We called that book Family Don’t End With Blood because that’s how we humans get through these challenges – by reaching out to other people. It might be family by blood, or it might be friends who are closer than family. It might be the incredible support system of a fan community, or someone you ‘meet’ online who is there for you despite half a world between you.  It might be a colleague, or the person on the other end of a suicide hotline. It might be a therapist who can help you rediscover your passion for something – anything – and for living. That’s how we can see even the tiniest glow of light in the darkness and nurture it until it’s a flame.

There will still be dark nights when you’re sure that light is going to go out, and those are the times it’s most important to reach out. People have told me that they keep a copy of Family Don’t End With Blood by their beds for those nights, so they can reach out and re-read Jared’s chapter – or Jensen’s or Misha’s or Kim’s or Ruth’s or Rob’s or many other chapters – and find a reason to keep fighting.

Maybe the book is a little spark of light for those people on those nights, that they can hold onto. And for me, that’s part of my light now too. That book – all my books – are an accomplishment and a source of joy that I would never have seen if I hadn’t gotten up off the ground and reached out for help. That they have helped others get up too makes the light that much brighter.

Wishing you all a healthy and happy 2019, and may you always be able to hold onto the light.

#HoldOnToTheLight is a blog campaign encompassing blog posts by fantasy and science fiction authors around the world in an effort to raise awareness around treatment for depression, suicide prevention, domestic violence intervention, PTSD initiatives, bullying prevention and other mental health-related issues. We believe fandom should be supportive, welcoming and inclusive, in the long tradition of fandom taking care of its own. We encourage readers and fans to seek the help they or their loved ones need without shame or embarrassment.

To find out more about #HoldOnToTheLight, find a list of participating authors and blog posts, or reach a media contact, go to http://www.HoldOnToTheLight.com and join us on Facebook https://www.facebook.com/WeHoldOnToTheLight

8 thoughts on “Love, Passion, Fandom and Lighting the Way for Each Other”