Hey fandom, need a little pick me up? I thought it might be a good time to post Sunday at DCCon photos and memories, as we head into the last run of episodes and the season finale. (See previous post for Friday and Saturday).

The boys were right on time for the morning Gold Panel, looking delicious, which I’m sure shocked absolutely no one. Jared’s scarf. Jensen’s cardigan. Mmmm. DC’s beautiful cherry blossoms got nothin’ on these two.

Jared came onstage and held up his hands in the shape of a heart as he looked out over the crowd. 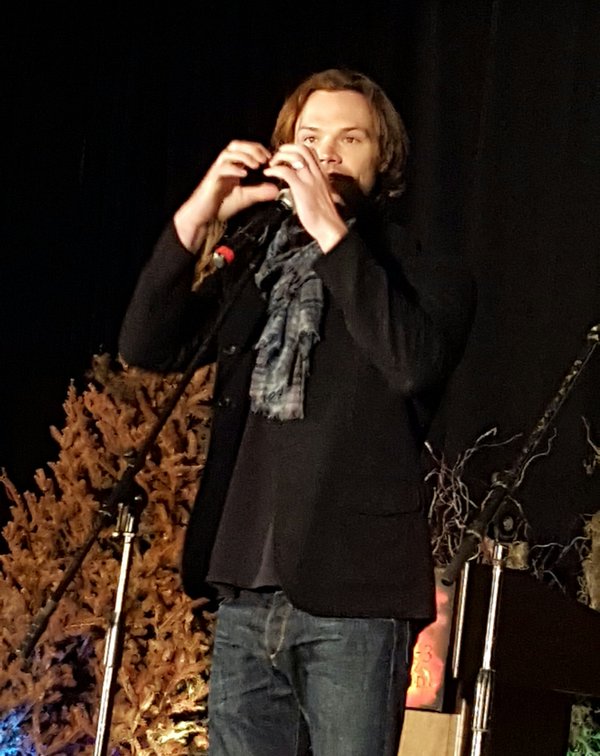 Jensen: Speak for yourself. I’m very functional. Especially in the morning. 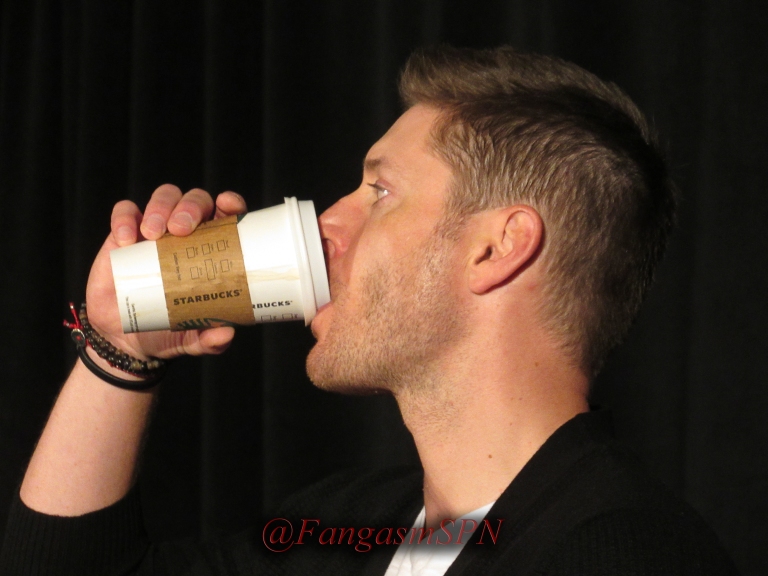 At Seacon, we were treated to the Padaboys onstage – at DCCon, Jensen had a chance to talk about JJ. Even though she wasn’t there, I think we all got a pretty good idea of how things are with her and her daddy from Jensen’s imitation – and Jared’s corroboration. Jensen confided how hard it is to be away from her. No wonder!

Jensen: JJ just strokes my face and says “I love you, Daddy…”

Jensen also told the story of Danneel recently sending him a video of JJ lounging in a chair pretending to smoke (ala a 1940’s Hollywood starlet).

Jensen: Where did she learn that??

They talked about stage fighting, and how it’s easiest when it’s the two of them (and the most challenging when you’re stage fighting with someone like Mark Pellegrino, who’s a trained fighter for real.)

Jensen: He missed me, barely. Hit my eyelashes.

Me and Kathy: Understandable. I mean, look at them. 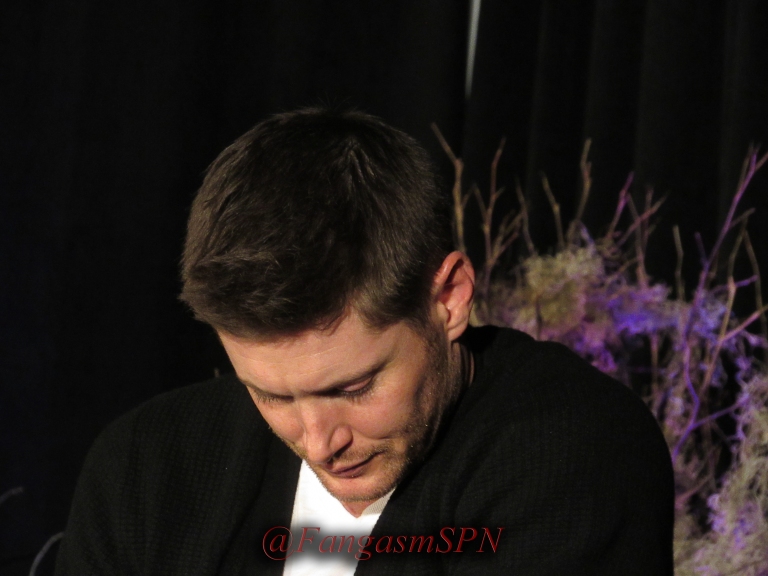 Jensen on fighting with Jared: It’s easier for us to fight each other, because we know and trust each other.

He likened their stage fighting to being dance partners.

Jensen: We’ve been dancing together so long. Uh…this is…not a perfect metaphor…

Jensen: Uh, what else do you do with a partner?

Jared: (grinning) This is going downhill.

Jensen: I’m waiting for you to bail me out!

The whole exchange was rather priceless. Also it included this:

Jensen: I’d like to see Priestly fighting demons in a kilt.

One of my favorite moments was when Jared talked about how much he liked that Sam and Dean were characters with flaws.

I think that’s an important message, tied into the AKF and YANA campaigns. Too often we try to hold ourselves to some unrealistic yardstick of perfection, and that’s usually not attainable. Flawed and imperfect does not equate to bad – it equates to human. Sam and Dean and Cas are great examples.

We also got a tiny bit of Jared with a guitar, which had us all holding our breath hoping he’d play it. Jensen keeps saying he’s good at it, and I think he was hoping Jared would play too. He bantered with the fans for a bit, giving Jared time to get comfortable and warm up, but we only got a few strums. Hopefully soon!

I had a chance to chat with Jensen and Jared a bit about the episode that had just aired, Red Meat – to tell Jared that he did an amazing job conveying Sam’s physical anguish and to tell Jensen that he did an equally amazing job conveying Dean’s emotional agony. Jensen laughed and said that he did something he doesn’t usually do – complimented Jared while they were watching. Not with the kind of gushing that I did in my episode review, of course. Instead it was a cocked eyebrow and an understated, “Nice.”

I’m playing this game now, ever since I talked with Jensen about the little ad libs that he adds into a script, the small moments when he just behaves as Dean would because he knows the character so well – I’m trying to identify them as they happen. I told him that scene where Dean is in the woods frantically trying to construct a litter to carry Sam back with them was heartbreaking, and that he just sold Dean’s terror and determination so well. Especially that moment when a branch hits Dean unexpectedly, and he just whirls on it and loses it! Was that scripted, I wanted to know? Jensen laughed again and said no.

He thinks my little game is funny, but so far? I’m totally guessing right. Hah!

Jensen also confided to me that he’d totally been “nerding out” the day before checking out the numismatics and the gun room and NASA’s 3D augmented reality. The really adorable thing is he sort of whispered the “nerding out” part, in a “just between us geeks” sort of way, which just warmed my heart so much.

I love it when they fanboy.

When I first saw Jared, he asked if I’d seen his Facebook reply to Misha that referenced Durkheim (which I had not – bad fangirl! And bad academic!)

Jared: My first thought was, oh Lynn will be proud of me! 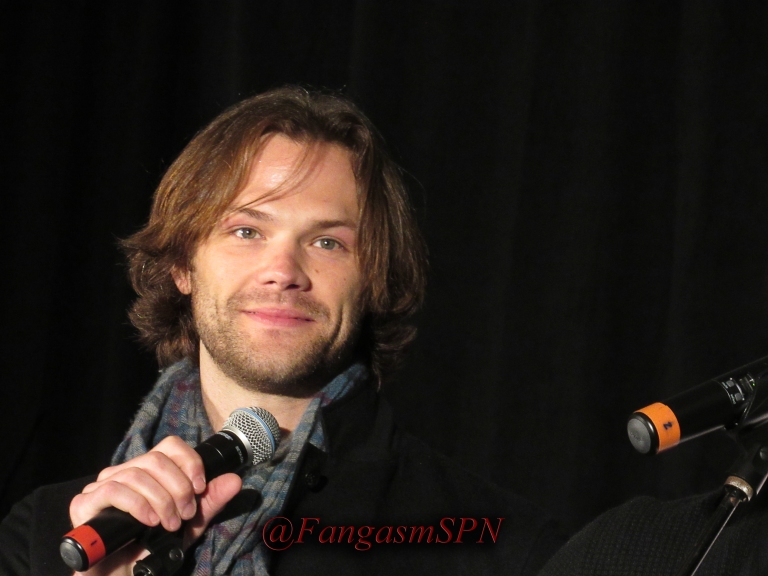 At the end of the day as I went through the autograph line to have a copy of Fangasm Supernatural Fangirls signed for a charity donation, I still hadn’t managed to find a second to go look up the post. Jared rolled his eyes and pulled out his phone.

“Here!” he said, and helpfully showed me exactly where to find the post and the tweet about it. Kathy and I ran out to the hotel restaurant immediately and pulled it up to read. And he was right – I was totally proud of him. And not at all surprised at his eloquence. Wait until you read his chapter in the new book!

Jake Abel entertained us in between J2 panels. He came out, appropriately, to ‘Dead or Alive’.

Jake had just as wonderful a time on Supernatural as every single other guest star in the history of ever has had, and he’d love to return. One of his favorite memories was drinking beer with Jared and Jensen on the roof of one of their trailers after they filmed the scene where Michael and Lucifer fall into the hole.

He also had some great stories.

Jake: I’m sitting next to Jared on set, all beautiful hair and muscles, and he’s like “I’m Fartacus!”

He also endeared himself to the fandom by acting out the Adam Is Still In Hell dance for some epic Tumblr gifs and leading the audience in a collective shout of “Hey Assbutt!”

Jared and Jensen walked out to surprise their “other brother”, and there were lots of hugs and butt slaps to show their affection. Awwww.

Jared was none too pleased to find that his chair actually had arms, which of course prevented him from spinning it around and straddling it like he always does.

Jared: (protesting the chair): I’m not a normal person.

Jensen made me grab for the tissues by saying that Jensen would feel very similar to Dean in the death of Sam – or Jared. It would create a hole that could never be filled.

Kathy and I looked at each other, blurry eyed, wondering how we got so lucky to fall in love with a show where the actors’ real life relationship mirrors the unprecedented bond the characters have on the show. Seriously. LUCKY.

Probably my favorite story was the boys talking about their live viewing of the last episode, in which Sam dies – almost dies – and so does Dean. (See my review for just how stressed I was during that episode).

Apparently Jensen was just as stressed. Never mind that he was there while they were filming it!

Fan: That last episode was so intense, the acting was amazing.

Jensen: I got so swept up watching it, I forgot I was in it!

As they were watching it together, Jensen kept hitting Jared in his excitement as he fanboyed. Then he yelled out “Oh, he’s awake!” when Sam woke up in the cabin.

Can I just say that Jensen and Jared essentially replaying a scene from Fangasm, in which I was overwhelmed with my fangirl excitement while watching Supernatural and kept hitting Kathy, made my day? I LOVE that they love this show every bit as much as we do – they truly are fans.

Jensen also managed to get in a little playful dig at Misha.

Jensen: Misha kept saying, ‘Let’s go Facebook Live’ – and then he was the one who couldn’t get it up. 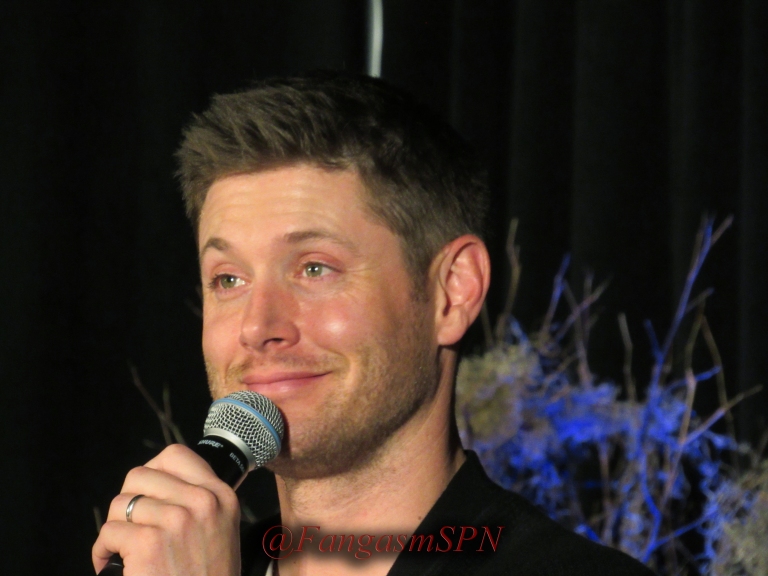 Both Jared and Jensen (and the entire fandom) agree that there should have been more of Demon!Dean. Jensen because he loved the story line and Jared because he wanted more time off.

Jared has said before that he really enjoyed playing Soulless!Sam, but it was very hard for Jensen.

Jensen: I was ready to get Sam back. And to get Dean back, who he is when he’s with Sam.

That says so much and makes so much sense. Again, lucky.

One of my favorite things about any J2 panel is just how much they enjoy each other. Here’s a whole series of photos of Jensen listening to Jared and eventually just getting this big grin on his face as he does. Not only is Jensen ridiculously gorgeous when he breaks into a genuine smile, but watching inevitably puts a smile on my face too. 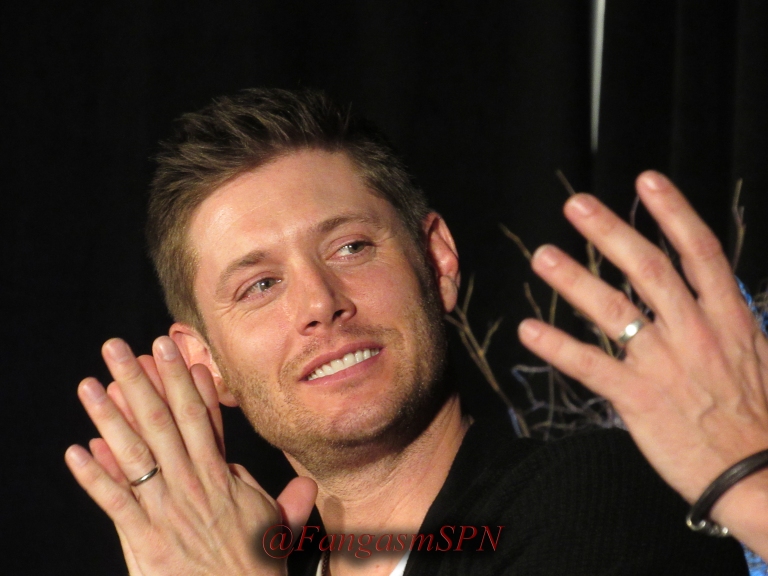 In response to a fan’s question, both Jensen and Jared said it was not easy to put into words how the show and the fandom have changed them, but it certainly has. Actually Jared – and many other Supernatural cast – say it very eloquently in the new book we’re working on. That’s exactly what it’s about – how the show and fandom have changed both the fans and the cast. All their stories are amazingly powerful – maybe more than you might expect. 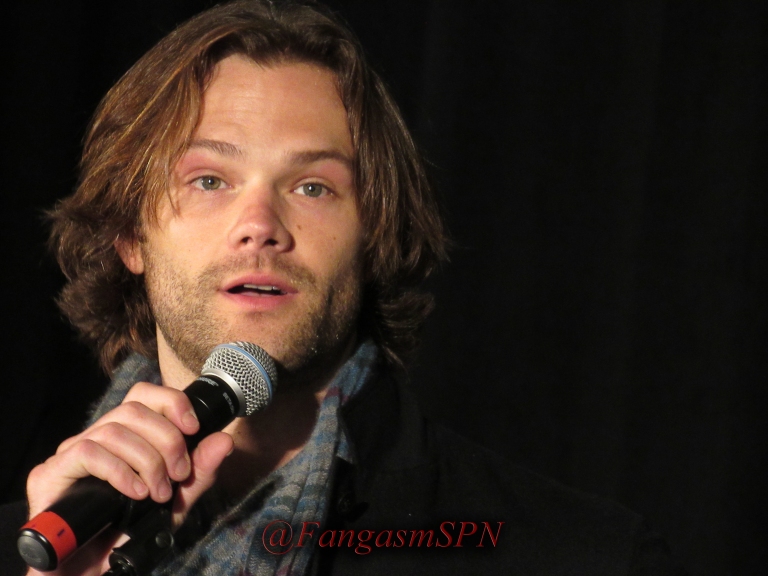 The last question was what advice would they give their season 1 characters (or selves). Good job, last questioner! 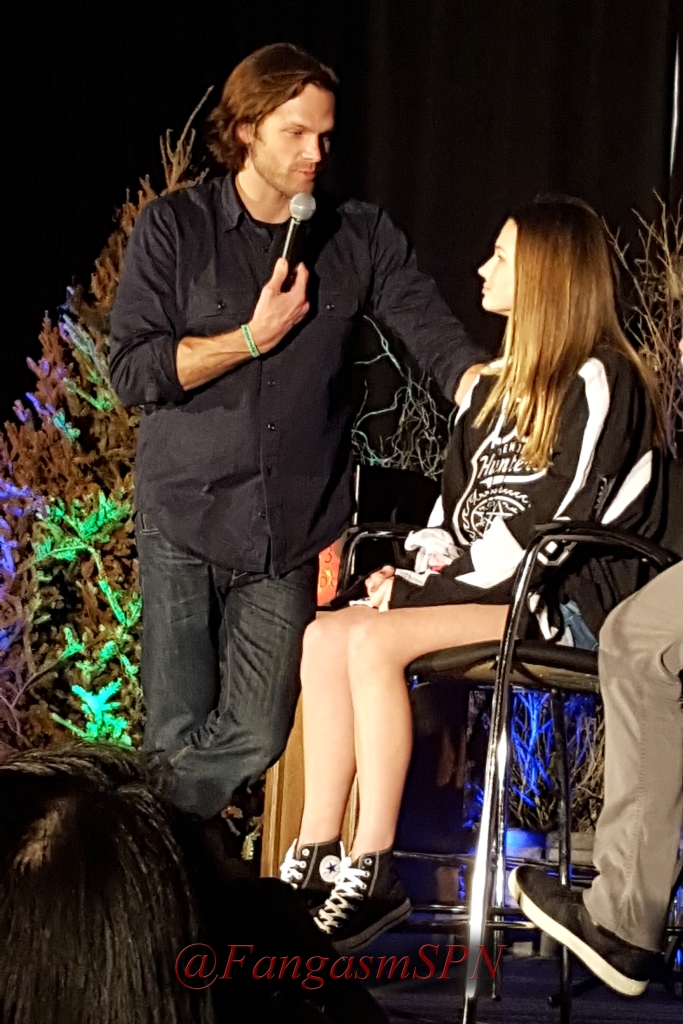 You get the feeling that the ramifications of that decision for his character really impacted Jensen too. That was a hard season to watch, and must have been a very hard season to act as well. 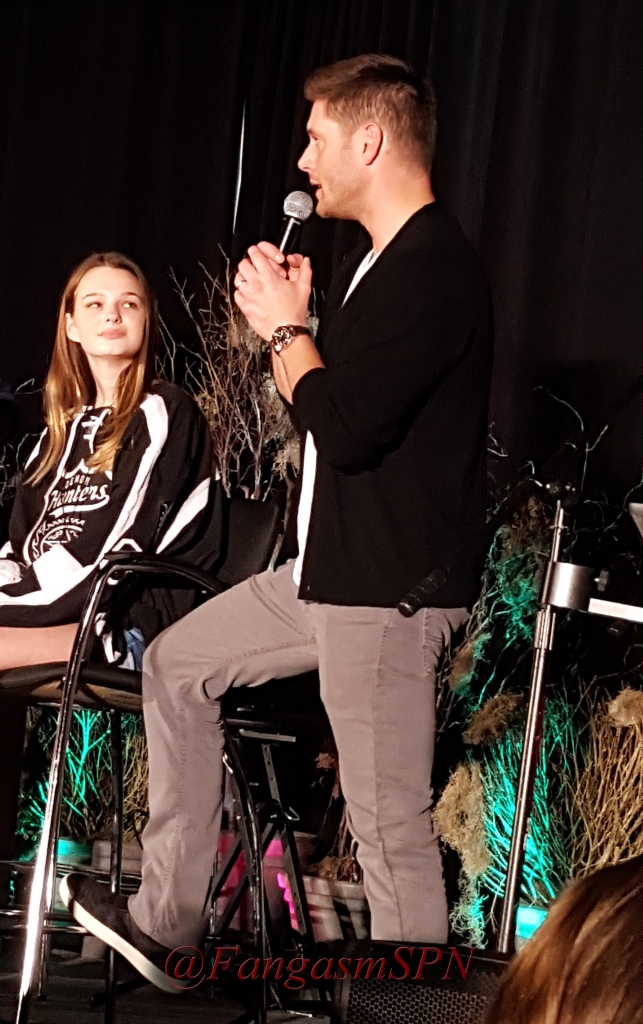 We got a little bit of singing from Jensen, and then the panel was over – which carried with it more than a pang of sadness, knowing we wouldn’t see the boys for a while. (Except for the glorious stream of Austin hiatus pics that keep gracing my twitter timeline, that is). 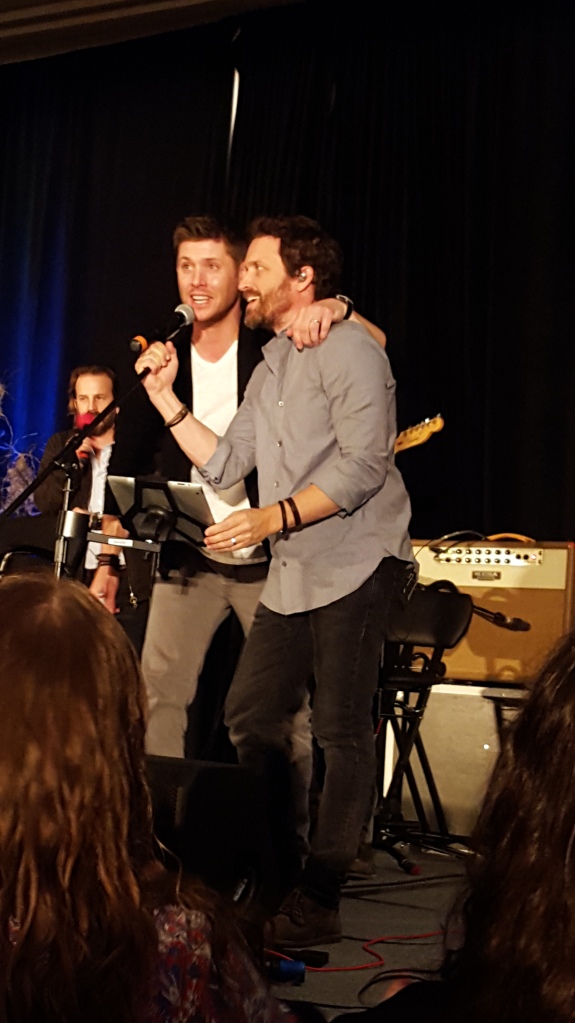 Ruth Connell entertained us again to close out the day, which is always a soothing way to ease out of a hectic convention weekend. 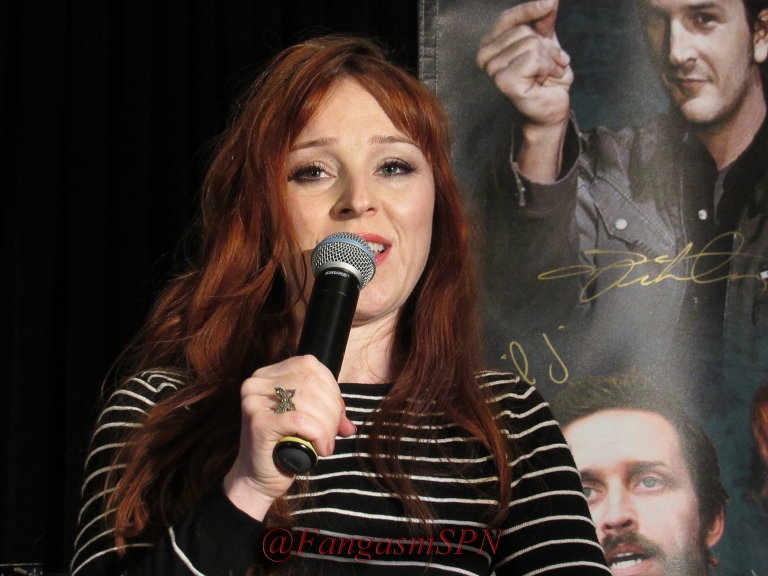 She called her buddy Kim Rhodes so we could all send our love to her too — miss you, Kim!

And got a hug from Richard at the end of the panel. 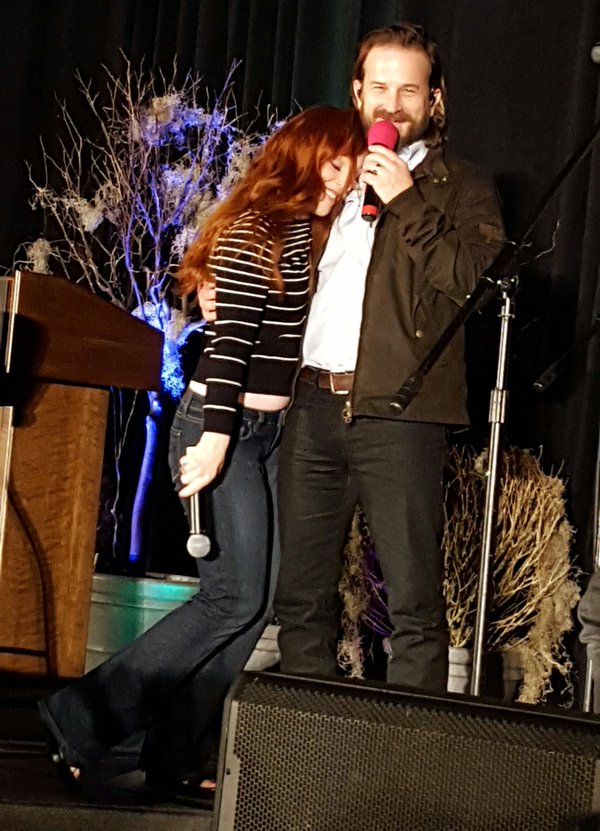 And then it was time for autographs and goodbyes. And goodbyes for me and Kathy too, as we went our separate ways back to our respective cities. But we have the end of the season to look forward to – and everything about it looks amazing!

Supernatural is back brand new this week, so stay tuned!