For Supernatural fans, Vancouver, where the show is filmed, is often referred to as ‘Mecca’. But there’s another contender for that title – Austin, Texas, where both Jared Padalecki and Jensen Ackles make their homes. Fans have been going to the San Jac Saloon in Austin for several years, ever since Jared Padalecki became the owner. And since January of this year, fans have had another place to congregate when they make the pilgrimage to Austin – the Family Business Beer Company, owned by Jensen and Danneel Ackles, her brother Gino Graul and their parents. That makes Austin a destination city for the SPNFamily.

So when the Paws4AKF charity coordinator contacted me to see if I would like to donate a copy of Family Don’t End With Blood for a charity event at the San Jac Saloon benefitting Austin Pets Alive and the National Suicide Prevention Hotline, I said sure. It seemed a small step to then say well, why not buy a ticket to the fundraiser and head out to Austin myself? After all, I’d been dying to experience Family Business Beer, so two birds, one stone, you get the picture.

At the same time, the more rational part of my brain was insisting that it’s never a good idea to buy a plane ticket with only a few days notice. I called Kim, partner in crime and fellow fangirl and talented photographer, to say this is a crazy idea, right? Kim agreed.

Lynn: So…. you wanna go? Take some pictures?

That’s how we found ourselves in Austin in late June, when the temperatures are just a wee bit higher than we’re used to. We flew in on Friday, me from Philadelphia and Kim from Kentucky, and managed to rendezvous at the Austin airport. Car rental figured out, we GPS’d our way into the city and checked into our hotel – and immediately ran into familiar faces. A large group of the SPN Family had showed up in force for the fundraiser. Most of us made the trek out to Family Business Beer when we arrived on Friday – and was it ever worth the 50 minute drive out of the city!

As the city fell away and the roads became more trees and nature than highways and buildings, we kept our eyes open for some kind of sign so we’d know when we were there. And sure enough, there was a sign! A few, in fact, all hand painted. The unassuming one at the entrance just said ‘Brewery.’ I believe Danneel Ackles painted the signs herself, since she and Jensen and Gino are the definition of hands-on owners. If so, lovely job, Mrs. Ackles. 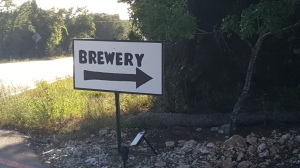 The signs directed us to the side lot where we parked, then made our way up to the main building. The Brewery itself was gorgeous in the summer sun, the interior tastefully decorated and blessedly cool and the outside dotted with picnic tables clustered under generous shade trees.

I’m so glad we had Kim and her camera to do it justice!