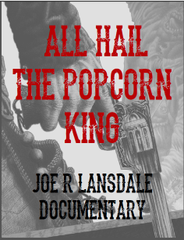 I usually write about my favorite television show, Supernatural, on this blog. But as an author, I admire other authors – especially ones who are able to write lots and lots of books with characters that capture reader’s imaginations and inspire them to change some of their world views. I also admire my fellow Supernatural fans and creators, including my good friend Hansi Oppenheimer. I so enjoyed working on her Squee project films – we share a love of Supernatural and an appreciation for creativity of all kinds. So when Hansi put her creative talent to use on a new project, I couldn’t wait to see it.

I had the privilege of watching a screener copy of Hansi’s new documentary film about groundbreaking author Joe R. Lansdale, ‘All Hail The Popcorn King’ – and found it captivating. Not only is it an intimate portrait of the author, it is also a walk through history. East Texas and its rich background comes alive through Lansdale’s memories as he paints a vivid picture of how things were when he started writing, inspired by the everyday (and yet unique) people around him. The drive in movie, the small town library, comics and Bugs Bunny cartoons, soap opera radio shows. The typewriter with keys that stuck and early manuscripts messy with white out and smudged carbon paper – as Lansdale himself says, some of his uniqueness comes from the meshing and crossing of different forms of media in the late 50s and early 60s as Lansdale was growing up.

[Joe and Bruce Campbell on the set of Bubba Ho-Tep]

Lansdale talks like he writes, and you don’t want to look away. He’s a storyteller, and that lends itself to a documentary. Hansi Oppenheimer makes the film a visual feast to go along with the verbal one, just as rich in walking us back through time. Vintage footage of drive-in movies and intermission concession ads create a feeling of nostalgia that works well with Lansdale’s rememberings.

The film traces Lansdale’s influences through the eyes of those who know and love him as well as through Lansdale himself. He walks us through his own history as he walks through the parts of East Texas that formed him, repainting the current landscape with his memories of what it was like when he was a young boy. It’s a rare glimpse into what makes an author tick, of the influences that impacted his writing and his style of storytelling. Lansdale has created characters who were groundbreaking in terms of representation, and who were inspiring enough to help people get through tough times in their real lives.

Joe: To think that fiction can do that, can have that impact, that’s kinda humbling.

That statement sort of encompasses both Lansdale’s influence and who he is as a person. How wonderful to have a film that captures both those things while Joe is still with us – and still writing.

I asked filmmaker Hansi Oppenheimer about her reasons for making this film and her appreciation of Joe and his work.

Hansi: I’ve been a fan of Joe’s work since the 80’s. I finally had the opportunity to meet him two years ago  when I was invited to appear at a con in Houston. I reached out to him to see if he’d be available for an interview for my Youtube channel and he invited me to Nacogdoches for lunch and the interview. After the interview, I reached out to him for a piece on a short about Joe Bob Briggs that I was working on and he wrote me the most beautiful, touching, funny piece and got it back to me in a day. I was so grateful that I promised him my next film would be about him and I ‘m so glad I did. I’ve never worked with anyone who was more honest, generous and collaborative. He reached out to some of the biggest names in Hollywood and introduced me so I could include them. As Mick Garris said “If you’ve read Joe Lansdale, you love Joe Lansdale”. He truly is a genre unto himself.

[Joe and Nick Damici on the set of Hap & Leonard]

I also wondered which of Joe’s stories and characters spoke to her personally and why?

Hansi: I really love The Drive-in. I’m obsessed with Drive-in culture and his novel takes that and turns it on it’s head. Another favorite is The Magic Wagon which is about a traveling medicine show in the early west with supernatural elements. I adore the Hap & Leonard series about  two “brothers” who try to fight the good fight despite overwhelming odds. (Sound like some characters we all know and love? Yes, Hansi is also a Supernatural fan) It was briefly made into a wonderful series on Sundance TV and is available on Netflix. I also loved his run on the comic Jonah Hex.

I’m sure I’ve forgotten many more favorites and there’s so many I haven’t even read yet. As his son Keith said “He writes them faster than I can read them.” He’s written over 50 novels and 500 short stories! So there’s something for everyone in his work. But the best thing about Joe is he is as genuine a human as you can find. He won’t bullshit you and he’s been a supportive and encouraging member of the creative community for decades.

[Joe, Karen, Keith and Kasey Lansdale at their home in Nacogdoches, Texas.]

There will be a screening of ‘The Popcorn King’ in Austin, Texas, on August 18 at the historic Alamo Draft House. Joe Lansdale himself and his family will be there, along with Brian Keene, Rick Klaw and Yuri Lowenthal, among others.  Filmmaker Hansi Oppenheimer and Joe will also appear at KillerCon on August 17 in Austin to discuss the film, hosted by Brian Keene. And on October 5, George R. R. Martin will host a Q & A and screening with Hansi Oppenheimer at the George R. R. Martin Cinema in Santa Fe, New Mexico, which should be fascinating.

There is also a a DVD available for pre-order at the Squee Projects site at  https://squeeprojects.com with bonus featurettes and additional interviews that didn’t make it into the final cut of the film.

Squee Projects is also looking to partner with people to bring the film to smaller community venues. If you would like to host a screening or partner with Squee, you can contact them at squeeprojects@gmail.com.

There’ll Be Peace When You Are Done - Available Now, wherever books are sold! @benbellabooks . . . #There’llBePeaceWhenYouAreDone #PeaceWhenYouAreDone #Supernatural #spn #spnfamily #spnfandom #spnfamilyforever #jaredpadalecki #padalecki #samwinchester #jensenackles #ackles #deanwinchester #mishacollins #castiel #somanyauthors #prettypictures #gorgeousart
Thank you @benbellabooks for all of your support! #PeaceWhenYouAreDone . . . . #Repost @benbellabooks with @get_repost ・・・ There’ll Be Peace When You Are Done: Actors and Fans Celebrate the Legacy of Supernatural, edited by the amazing Lynn S. Zubernis, is an emotional look back at the beloved television show Supernatural as it wraps up its final season after fifteen unprecedented years on air. We're so happy to share that it's out today. 👻⁠ ⁠ With heartfelt chapters written by both the series’ actors and its fans—plus full-color photos and fan illustrations—There’ll Be Peace When You Are Done traces Supernatural’s evolution, the memorable characters created by its writers and brought to life by its talented actors, and the many ways in which the show has inspired and changed the lives of both its viewers and cast.⁠ ⁠ Both a celebration of Supernatural and a way of remembering what made it so special, this book is a permanent reminder of the legacy the show leaves behind and a reminder to the SPN Family to, like the series’ unofficial theme song says, “carry on.”⁠ ⁠ Including contributions from: Jared Padalecki (“Sam Winchester”) ▪️ Jensen Ackles (“Dean Winchester”) ▪️ Misha Collins (“Castiel”) ▪️ Andrea Drepaul (“Melanie”) ▪️ Carrie Genzel (“Linda Bloome”/”Linda Berman”) ▪️ Julie McNiven (“Anna Milton”) ▪️ Tahmoh Penikett (“Gadreel”) ▪️ Shoshannah Stern (“Eileen Leahy”) ▪️ Brendan Taylor (“Doug Stover”) ▪️ Lauren Tom (“Linda Tran”) ▪️ And many more!⁠ ⁠ Learn more and get your copy at the link in our bio.⁠ ⁠ --⁠ ⁠ #spnbook #supernatural #deanwinchester #samwinchester #spnfamily #castiel #supernaturalfamily #spnfandom #jaredpadalecki #mishacollins #jensenackles #alwayskeepfighting #akf #lynnzubernis #bookworm #bibliophile #reading #booknerd #booklover #book #bookish #bookaddict #booklove #instabook #igreads #instareads
Thrilled to have @leemajdoub in our new book There’ll Be Peace When You Are Done #PeaceWhenYouAreDone . . #Repost @leemajdoub with @get_repost ・・・ Just got my copy of "There'll Be Peace When You Are Done." I'm honored to have contributed to this book and share my experience playing Hannah & being welcomed into the #spnfamily @cw_supernatural Thank you @fangasmspn Join us on Wednesday at 9pm EST / 6PM PST for a virtual book launch! Info & contributors are in the next picture! #SPN #Supernatural #Hannah
Great reminder - The glass is definitely half full! . . #Repost @familybusinessbeerco with @get_repost ・・・ Given the current set of circumstances it’s easy to feel down. But there are still so many things to be thankful for. Let’s take time to remember the “glass is half full” . . . #jensenackles #ackles #deanwinchester #supernatural #spn #spnfamily